…from the incomparable Snow Country by Yasunari Kawabata.

Do these vintage international Japanese novels have the most incredible covers ever, or what? 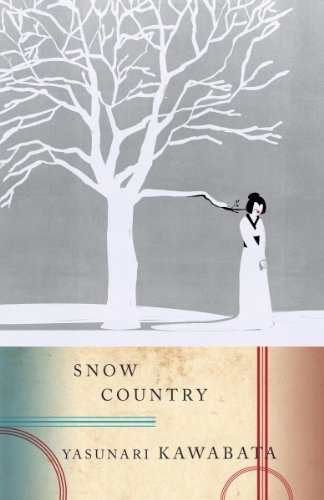 You are always new. The last of your kisses was ever the sweetest.

…from The Razor’s Edge, by Somerset Maugham

To his surprise, she leaned over and kissed him on the forehead, a kiss so full of affection that it dispelled the awkwardness, even as it caused Miles’s heart to plummet, because all kisses are calibrated and this one revealed the great chasm between affection and love.

…from Empire Falls, by Richard Russo.

To acquire even a degree of self-control, he had had to ponder the question of life and death for many years, discipline himself at every turn of the road, force himself to undergro the rigors of a samurai’s training. With no training or conscious self-discipline, this woman was able to say without the slightest hesitation that she, too, was prepared to die if he did. Her face expressed perfect serenity, her eyes telling him she was neither lying nor speaking impulsively. She seemed almost happy over the prospect of following him in death. He wondered, with a tinge of shame, how women could be so strong.

I love this book.

While yearning to gain
The depths of the mountains,
I’m drawn against my will
To the places
Where people reside.

I don’t mean to say that I know, of my own knowledge, what there is particularly dead about a door-nail. I might have been inclined, myself, to regard a coffin-nail as the deadest piece of ironmongery in the trade. But the wisdom of our ancestors is in the simile; and my unhallowed hands shall not disturb it, or the Country’s done for. You will therefore permit me to repeat, emphatically, that Marley was as dead as a door-nail.

…A Christmas Carol, by Charles Dickens, who is grossly underrated.

When this picture was taken she was head over heels in love with Tom Evans, but for some reason love, even of the most ardent and soul-destroying kind, is never caught by the lens of the camera. One would almost think it didn’t exist.

…William Maxwell, from So Long, See You Tomorrow

Water has its own archaeology, not a layering but a leveling, and thus is truer to our sense of the past, because what is memory but near and far events spread and smoothed beneath the present’s surface.

…from “The Woman at the Pond,” by Ron Rash, collected in Nothing Gold Can Stay.

Sometimes a moment is so remarkable that it carves out a space in time and spins there, while the world rushes on around it. This was one such.

…from Strange the Dreamer, by Laini Taylor

Your heart, Bessie, is an autumn garage.

…J.D. Salinger, from Franny and Zooey.

A waitress gave me this book in 2003. Then she disappeared.

The world is old, it was always old,
There’s nothing new in it this afternoon.
The garden could’ve been a padlocked window
Of a pawnshop I was studying
With every item in it dust-covered.

…from “Emily’s Theme,” by Charles Simic, in Walking the Black Cat.

Nena Daconte was almost a child, with the eyes of a happy bird, and molasses skin still radiant with the bright Caribbean sun in the mournful January gloom, and she was wrapped up to her chin in a mink coat that could not have been bought with the year’s wages of the entire frontier garrison. Her husband, Billy Sánchez De Ávila, who drove the car, was a year younger and almost as beautiful, and he wore a plaid jacket and a baseball hat. Unlike his wife, he was tall and athletic and had the iron jaw of a timid thug. But what best revealed the status of them both was the silver automobile whose interior exhaled a breath of living animal; nothing like it had ever been seen along that impoverished border. The rear seat overflowed with suitcases that were too new and many gift boxes that were still unopened. It also held the tenor saxophone that had been the overriding passion of Nena Daconte’s life before she succumbed to the disquieting love of her tender beach hoodlum.

…Gabriel García Márquez, “The Trail of Your Blood in the Snow,” Strange Pilgrims

…said Perry, whose voice was both gentle and prim – a voice that, though soft, manufactured each word exactly, ejected it like a smoke ring issuing from a parson’s mouth.

How many passions lay spent within his body like a tangle of rusted springs?

…This book has the most beautiful cover art I’ve ever seen. 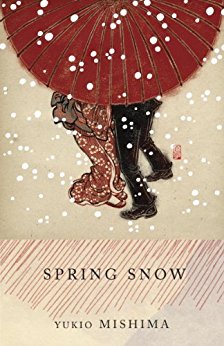 He had merely fallen face down across the bed, as though sleep were a weapon that had struck him from behind.

She’s certainly bewitched me
with her innocent airs.
As light as blown glass, her figure,
her bearing seems like a figure off a screen.
But she instantly frees herself
from the glossy lacquer background.
This little butterfly flutters and
settles with such silent grace,
That I am overtaken by the urge to pursue her,
Even if I have to tear off her wings.

…not from a Charles Simic poem, surprisingly, but the plangent first act of Puccini‘s Madama Butterfly.

One of my father’s real social skills, however, was carving out space in a crowded bar. Someone would pivot slightly and there he’d be, one elbow on the mahogany, clearing somebody’s highball glass out of the way with a sophisticated sleight of hand, a twenty-dollar bill materializing in its place. Given this small opening he then managed somehow to look for all the world as if he’d been right in that spot since the building was erected. The illusion was so overpowering that those he displaced often apologized when they discovered him there.

He began to pace every room, like a happy lunatic, waving his hands and reciting the film in great shouts. We listened to him, dazzled, and it seemed we could see the images, like flocks of phosphorescent birds that he set loose for their mad flight through the house.

…from “The Saint,” by Gabriel García Márquez, in Strange Pilgrims.

I like men who have known the best and the worst, whose life has been anything but a smooth trip. Storms have battered them, they have lain, sometimes for months on end, becalmed. There is a residue even if they fail. It has not been all tinkling; there have been grand chords.

…from Burning The Days, by James Salter, above whom no one stands any better at writing, simply, of men.

…from a tedious book about a fish.

There was a game he liked that he had once played all the time. It was who could get you to cry in the fewest words? There was a line in The Three Sisters: “You mean, I’m being left behind?” But Irwin always quoted the article by Gay Talese about Joe DiMaggio: On their honeymoon in Tokyo, Marilyn Monroe had gone off on a USO tour and come back and said, Joe, there were a hundred thousand people there and they were all cheering and clapping; you’ve never seen anything like it.

Yes, I have, DiMaggio said.